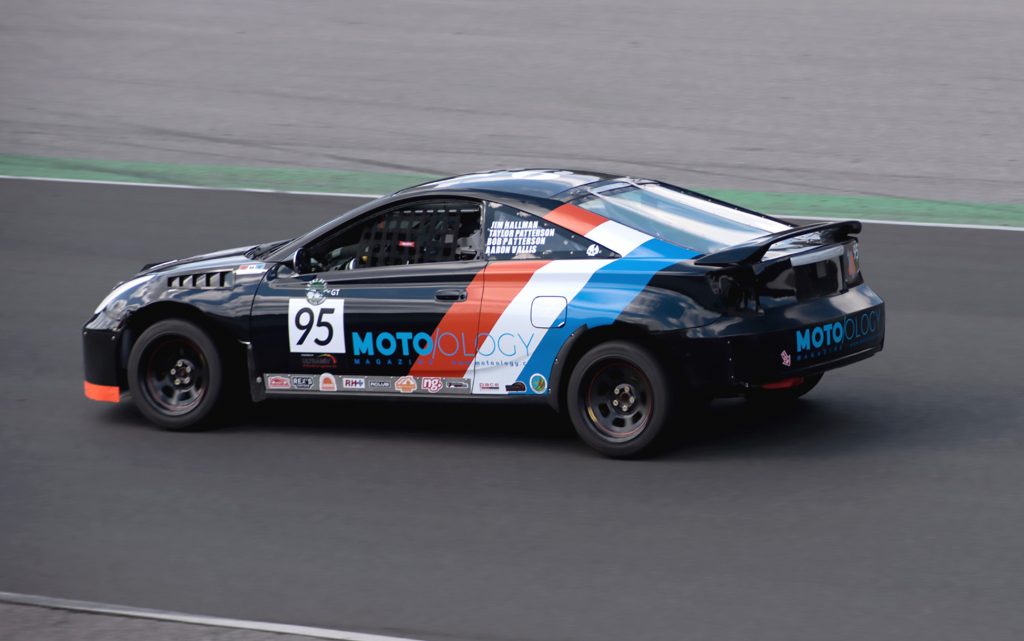 Just as a bit of background, Bill Vallis is quite a legend in the Canadian Formula Vee and Formula 1200 circles and his son, Aaron Vallis is following his father’s path and is the principal of a winning motor-racing team. The Lucky Dog Series is a local endurance racing series that offers affordable amateur racing to anyone that can field a car and put together a team. The specs are simple and the requirements are forgiving, however, the competitiveness is not. The emphasis is on reliability, consistency and of course, speed. Through this past 2022 season, the MOTO/ology-Bloxsidge Manufacturing Lapped Traffic Lucky Dog Racing Team was running under the auspices of Vallis Motorsport and consisted of drivers Aaron Vallis, Jim Hallman, Taylor Patterson, Bob Patterson, Dan Coomber, Jim Huppunen and Dave Taylor. Also, able assistance was provided by a dedicated crew that included Sandra Coober, Brent Fishleigh, Stacy Gamble, Geoff Smith and of course, Bill and Shirley Vallis. The team competed in 7 of the 9 races held over 5 events in the series. (One event was missed due to a case of COVID on the team!) Over the year, the team scored four class wins and a 3rd place finish in a very strong showing. In the final weekend races at Calabogie, the team managed a fantastic result in spite of some initial problems.

We received the following e-mail from Aaron Vallis:

Happy Thanksgiving! Just a quick update on our season. Last weekend we ran a double 8 at Calabogie Motorsport Park, going into the weekend with an 11-point lead in the GT3 Championship. Although we had some reliability issues this year, we were cautiously optimistic about our chances of clinching the title. We also had a new driver that had never raced sedans, so there would be some learning on the fly. Everyone ran conservative lap times on Saturday, and after spending most of the day in 3rd place, we shuffled into first with some late day pit stops by our fellow podium finishers. Standing second in the GT3 points championship by finishing 6th on the day, we opened the points gap enough to seal the deal with Saturday’s race.

Saturday night prep however revealed a couple of unsettling issues. Our right rear brake pads were worn down to the backing plates, I suspect a sticky piston was the culprit. More concerning, on the left front hub, 2 of the 5 wheel-studs had broken! I imagine 1 more would have resulted in the loss of a wheel at high speed. Fortunately, we had all the necessary parts to quickly put everything back into proper racing form, then we enjoyed our dinner and got good night’s sleep.

Sunday, I let the drivers loose to have some fun, and our lap times continued to drop. Just past the 6-hour mark, our fastest and most experienced driver found himself pointed in the wrong direction through turn 1 but he managed a miraculous save and kept it off the wall. Our tires were badly flat spotted by the incident however, and a pit stop was required to swap out all four tires. Despite this unplanned excursion we still managed a 3rd place on the day.

So… I did some quick math on our season…