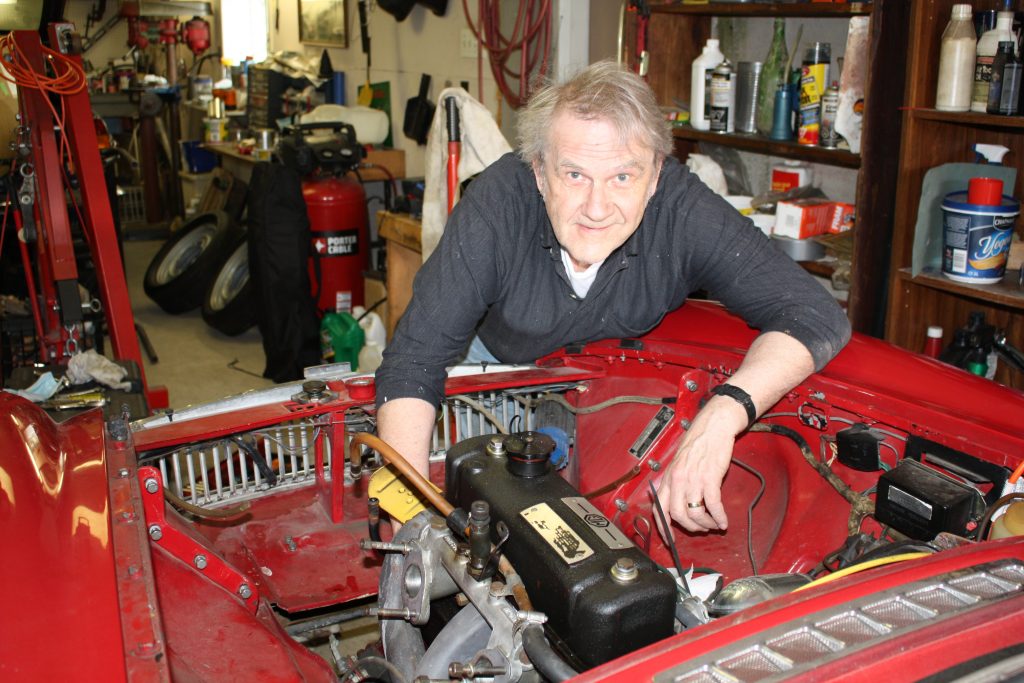 Admitting you have a problem is the first step.

OK, so I admit it. I’m a SAP-ist. One who has a Stalled (and/or) Abandoned Project. I have one, no, two…no three, oh, maybe more. I have now however, finally come to grips with my affliction. I’ve admitted I have it and have faced it and yes! The enemy is myself, so… I’m meeting the challenge head-on and assaulting my SAP.

How to eliminate a SAP

I was asked by a friend and fellow-sufferer, “how does one do this?” The answer is actually quite simple, you just stop putting things off, tell the people that try to woo you away for a party, or good time, or a meeting or whatever, that you have to do something very important and you leave them. You go and get a supply of your favourite beverage, don your work clothes and sequester yourself in your garage, shop or whatever—close the door and just get on with it.

Last week, I grabbed my manual(s) and tools and headed for the garage where my poor MG’s and the racer had been languishing since last year. Actually, the FV racer had been sitting somewhat properly stored since its outing last fall, but I’m embarrassed to say, my MG roadster, has been comatose since our great move and upheaval over 2 years ago. My MGB GT which is to eventually go to my son has alas been embalmed in a state of suspended animation for almost 8 years! Enough is enough!

First thing on the anti-SAP program? Fix the danged MGB roadster’s leaky transmission. My car is a non-overdrive base “B” Roadster from early 1965. The car had transmission issues from the day I bought the thing ‘way back in 1970 (it was in fact, my first driveable car!) and I’d already repaired the old Moss-type ‘box twice, but I found that I needed a more usable car. So, some years ago on an excursion to the UK I purchased a conversion that uses a Ford Type 9 Sierra gearbox (typically from a Merkur on this side of the pond).

I had the ‘box “freshened” by a chap at a local transmission shop who came highly recommended. My only real demand was that the seals and gaskets all be in good order so the thing wouldn’t leak. He promised me all was good. I installed the “new” trans and “kit” and went for a test drive, it was wonderful! What a delight having a more modern all-synchro 5-speed! This transformed the car, it was now even more of a pleasure to drive, even on the highway. The downside was the development of a puddle of very expensive and hard-to-come-by Ford transmission fluid on my driveway that was getting bigger every day.

After just over a week of puddling, I decided to go and see my “rebuilder”. That’s when things went from bad to worse. I was told he’d dropped dead from a heart attack a few days earlier! (may he RIP)

Not having the time nor inclination to tear the thing down again, for years I drove the car very little and kept pouring fluid in the trans only to have it pour back out the bottom, then finally a couple of years ago, I took it off the road.

Fast-forward to the here and now, and I, wrench in hand and jacks under the car, am ready to remove the engine and gearbox, separate them and take the ‘box to someone who would really do it up properly once and for all. Dreaming of a time when I have it back together. Driving down the road. One SAP lighter.

Or so I thought…

I will keep you posted on the progress! Hopefully, this will inspire anyone with a similar affliction.

Admitting you have a problem is the first step. OK, so I admit it. I’m a SAP-ist. One who has a Stalled (and/or) Abandoned Project.

I’ve had one of those soul-searching moments recently. I was lamenting to a friend about what I call the SAP-Syndrome. This is the “Stalled/Abandoned Project”

One year in and we are ‘racing’ towards building a bigger and better community.