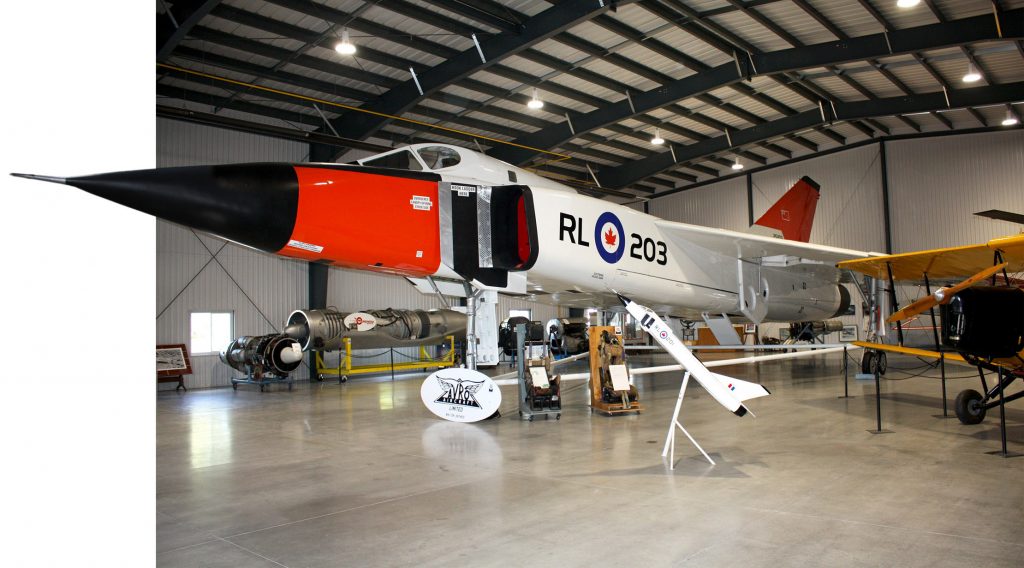 Due to political intrigues and financial machinations, the original cold-war Avro Arrow interceptors and their entire development program were ordered scrapped along with their tooling and technology. A decade or so ago a group of enterprising people assembled a full-sized static replica of this iconic accomplishment, but it almost met with the same fate as the originals.

For those regular readers of Moto/ology, you may recall in a previous issue, our coverage of the British Commonwealth Air Training Plan airfields in Southern Ontario, Canada. In that article we mentioned the Edenvale Aerodrome, a former World War II satellite airfield of one of the main training airbases at Camp Borden, near Barrie, Ontario. Edenvale was decommissioned after the war and eventually declared superfluous to the needs of the military and reverted to private ownership. Like other abandoned airfields, through the 50s it was used as a motor racing circuit until the purpose-built Mosport Circuit was finished just north of Bowmanville, Ontario and most of the province’s road-racing motorsport activities migrated there.

Edenvale was eventually purchased in 2003 by an enterprising and passionate aviation enthusiast by the name of Milan Kroupa who re-developed the facility into a proper airport and added a flight school to re-establish the operation as a training base. Among the many improvements and additions made to the airport, a small but fascinating museum was established to pay homage to the illustrious past of the property and Canadian aviation accomplishments in general. The Czech-born Mr. Kroupa and his staff procured several aircraft to be put on static display and along with some neighbouring tenants the airport is host to some iconic relics from the past.

On a soaring display outside is a Soviet-era MiG-15 formerly of the Czechoslovak Air Force welcomes you to the Edenvale Aviation Heritage Museum. Reportedly it was discovered and rescued by Mr. Kroupa from a scrapyard in the Czech Republic, then brought back to Canada, re-assembled and erected in its present display pose at Edenvale. Parked next to the MiG is a Canadair CT-114 Tutor jet trainer in the livery of the Canadian Snowbirds Aerial Demonstration team. This particular Tutor never actually flew with the famous Snowbirds but was a display aircraft used in promotions for the team and it is wearing an accurate Snowbirds paint scheme.

Next to the Tutor is the last of 99 de Havilland-built Grumman Tracker anti-submarine/maritime patrol aircraft that belonged to the Royal Canadian Navy. Originally, these aircraft were licence-built by the de Havilland Canada company for use on the Canadian navy’s aircraft carrier Bonaventure. As an interesting sidenote, to enable them to fit onboard the smaller Canadian carrier, they were built with a wingspan shortened by almost 3 feet and their overall length was reduced by 18 inches from the U.S. Navy versions. Just before the Bonaventure was retired in 1970, the last carrier fixed-wing operations were performed in late 1969 and the Trackers were then shifted to operational duties from land bases. They continued making maritime sovereignty flights and performing coastal patrol roles off both the east and west coasts until their final retirement and withdrawal from service in 1989. As we previously mentioned, the Edenvale Tracker is the last of the 99 licence-built by de Havilland Aircraft at their Downsview plant.

Another interesting attraction at the Edenvale Aerodrome is the next-door neighbours to the Aviation Heritage Foundation Museum, the Edenvale Classic Aircraft Foundation who own and operate several vintage and classic aircraft including a wartime Fleet Cornell and a DH-82 Tiger Moth. The public can book flights in these wonderful old training planes and every August, they celebrate the history of the airport by putting on a “Gathering of the Classics” show featuring classic autos and aircraft.

Meanwhile, back at the Heritage Foundation’s facilities we were ushered inside the large 8000 square foot hanger that houses more of the collection and we were greeted by another de Havilland Canada DH-82A Tiger Moth dressed in bright wartime yellow livery and appearing just as it would have when in service with the British Commonwealth Air Training plan at many airbases similar to this that were scattered around the country. The most breathtaking sight however, is what the dainty Tiger Moth nestles under—the port wing of the museum’s crown jewel, the full-sized CF-105 Avro Arrow replica.

It’s pretty difficult to be Canadian and not know the story of the ill-fated Avro Arrow interceptor and the financial and political chicanery that culminated in its demise along with all the lost technology and the crippling of our domestic aerospace industry. There have been many pieces written about that particular piece of cold war history, enough so that we won’t get into those particulars here, rather we just want to drink in the replica and see it as a tribute to what might have been. It should be noted, however that the replica was languishing in storage for many years before being rescued by Mr. Kroupa’s team and taken to Edenvale for permanent display.

This magnificent full-scale “model” is truly a wonder to behold. Although it is non-flying and may only be a mostly hollow shell, it is externally a very precise copy with many minute details and one can see and feel the presence of this famed but unfortunate aircraft as you walk around it. As for those details, the volunteers that built this thing a decade or so ago were careful to mimic subtle features like the clamshell opening of the cockpit canopies, the period instruments inside and even an original-type period ejector seat. Also replicated are the wiring looms in the open landing gear bays along with the hydraulic lines than run around the compartments that are exposed when those gear doors are open. I found one of the most impressive things was the landing gear components themselves. The struts, levers, actuators, tires and wheels were all constructed to closely replicate the originals by none other than the Messier-Dowty company, heir to Dowty Equipment of Canada Ltd., suppliers of the original landing gear components for the original Avro Arrow aircraft!

The replica is truly a sight well worth seeing and along with the other aircraft, artifacts and descriptions from the well-versed docents at the museum, a visit and tour is a most enlightening experience.

If your travels take you to the southern Georgian Bay/Barrie, Ontario region of the country, it’s well worth calling and booking a visit to Edenvale Aerodrome and seeing this wonderful tribute to what might have been.

General admission is $18, Military members admission is $16 and children under 9 are free. All fees are in Canadian Funds. Tour tickets must be booked in advance via www.avroarrow203.com. Please note that tickets must be purchased online and you must check in at the airport Terminal Office 15 minutes prior to the tour. Please call the office for more details: Telephone: 705 428 3112 ext. 221