When Ford Had A Better Idea 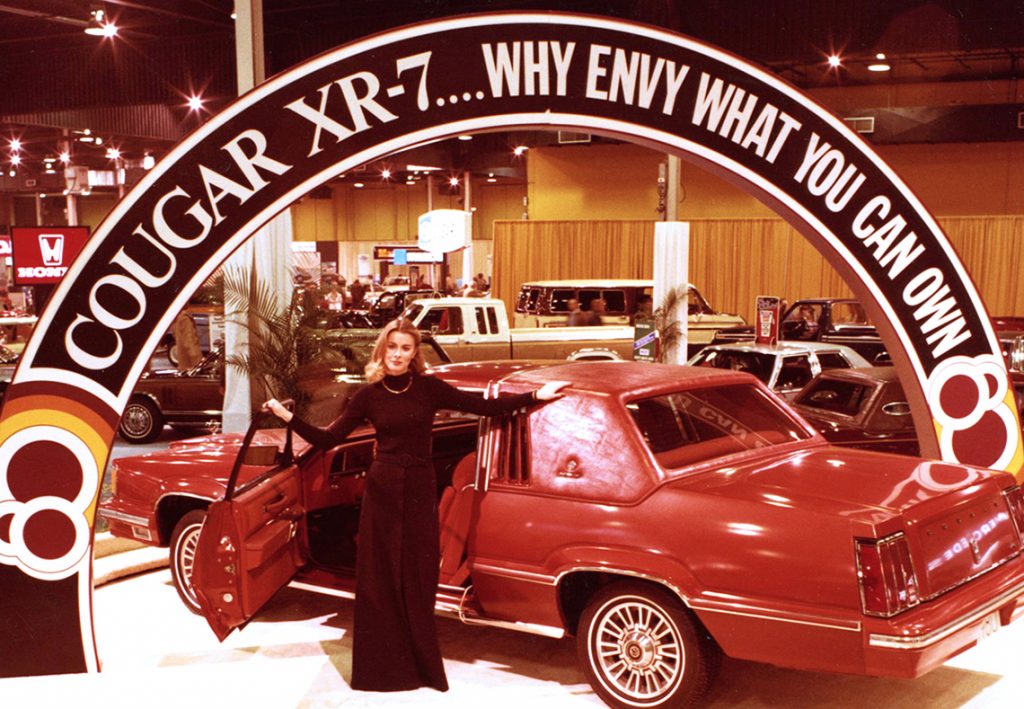 While GM flaunted their glitzy Parade of Progress, Motorama and other big travelling extravaganzas, Ford also jumped on the auto-tradeshow bandwagon but with a more subtle approach.

Ford of Canada has displayed its products at special shows for over a century in Canada.

Although Ford did not present its wares to the public in the glitzy Hollywood manner of GM’s Motoramas, it did make a good showing for itself through the decades.

Most large Canadian cities have auto shows where the vehicles of auto makers are on display. Back in the day, the largest presentations took place at the Automotive Building at the Canadian National Exhibition in Toronto. In this vast cavern Ford held prominent displays from 1929 until 1967. Then there was a lull in the Canadian auto show scene and it wasn’t until 1974 that the Toronto International Auto Show returned, this time at the International Centre across from Pearson International Airport and then in 1986 the Auto Show moved to the new, massive Toronto Convention Center, where the event still takes place.

Close to 50 years ago Ford highlighted vehicles from one end of its line-up to the other with the 1975 Mercury Bobcat and the 1975 Econoline van. Ford believed these two vehicles were going to be the hot items in their fields and would be in high demand.

“The 1975 Mercury Bobcat, an economy small car, will help Ford of Canada maintain sales leadership in the country’s small car segment,” said company vice-president William Hawkins at the time. “The 1975 Econoline Van and Club Wagon will increase the company’s sales in the van and small bus segment.”

The Bobcat was merely a re-badged Pinto, similar to the Chevrolet Vega – Pontiac Astre scenario in Canada. Neither Ford or GM were aware of the Japanese auto tsunami that was about to hit North America or they were deliberately ignoring it. The Club Van was popular with airport limo companies and was eventually replaced by the large Ford Expeditions and Chevy Suburbans to haul people.

The Bobcat was the seventh domestic small car to be offered by Ford since the introduction of the Maverick in 1969.  With the looming prospect of a fuel shortage and crisis in the early seventies, the trend toward smaller cars seemed to be a pretty safe bet for North America’s domestic manufacturers. With an apparent decline in import sales, the stage seemed set for the success of these home-grown products and the North American manufacturers thought they were leading the pack.

“Small cars have recorded the most dramatic growth of any segment of the automobile market,” Hawkins continued, “increasing from 28 percent in 1967 to 50 percent in 1974. At the same time import car sales have been declining.” He added that imports were down from 27 percent to 16 percent in 1974. The “Big Three” actually thought they were on the crest of this sales wave.

Little did he realize, or anyone else making small domestic autos at the time, how these figures would dramatically change in favour of the imports.

Also displayed at the 1975 Toronto International Auto Show at the International Centre was an example of the first Ford built in Canada.

This 1904 Model C was an updated version of Ford’s first car produced for the public, the Model A built in Detroit in 1903. Ford opened a facility in Walkerville, Ontario (now part of Windsor) across the river from the Motor City. The Model C on display was believed to be the 21st Ford built in Canada. It was sold, lost, and then found in 1945 in a Ford parts warehouse in Calgary, Alberta. It returned to head office in 1949 and was restored and became a darling of the show circuit.

Alongside the Model C was a computer-enhanced display which Ford claimed to be the only one in North America.

Known as the Ford Car-Guide Computer, this marvel of early digital technology would be able to tell the user what vehicle meets his or her demands after ticking off answers to 11 questions on a paper form. The computer questions dealt with number of people to be accommodated in the car, fuel economy desired, initial cost, distance travelled, and luxury options. Ford claimed the user’s answer was provided by the computer in “seconds.”

This period was the dark ages of the automobile, but there were chinks of light starting to appear as auto makers refined their products with more-efficient engines, the use of better plastics and other man-made materials, and practiced weight reduction.

But according to Ford Motor Company of Canada Ltd. Chairman Kenneth Harrigan, the largest (and heaviest) car in the company’s lineup was the exhibit highlight.

“But the star of the show, in my opinion, are a pair of new cars that are produced only in Canada for the entire North American market,” he said. “I’m referring to the 1992-model Ford Crown Victoria and Mercury Grand Marquis.”

As domestic auto makers dropped their traditional full-size cars, such as the Chevrolet Caprice, Buick Roadmaster, and Dodge Monaco during the final years of the 20th century, Ford filled the hearts of law enforcement with joy everywhere by continuing to build these large cars. With some different body panels, these V8 rear-drive cars, along with big-brother Lincoln (it was six inches longer) were the darlings of limo services as well and regular users who wanted the comfort and safety of a large body-on-frame car.

Perhaps Mr. Harrigan highlighted the Crown-Vic and Marquis because they were produced only in Canada, at the company’s Saint Thomas facility, and 90 percent of product built there was exported for the US. In fact, several years before its demise in 2012, it was almost impossible to get a Crown Vic in Canada except for police agencies as the cars were not sold to the general public.

Ford did well with this model. It sold 1.5 million copies from 1991 until it was discontinued.

Also at the 1991 show was a harbinger of the future with two Ford show cars, the Splash, and the ShocccWave (Yes, I checked the spelling three times). The Splash was a “multi-purpose” vehicle with user flexibility and all-wheel drive. Sounds like an early SUV.

The ShocccWave featured fiber-optic head and taillights, a plastic and composite body, and 35-series tires which delivered the power from the 24-valve V6 engine to the road. The Mercury Cyclone displayed did not feature the stump-pulling, ground-thumping power of its namesake from the late 1960s but was adorned with rear-view television screens to replace the exterior side-view mirrors.

There was probably a Ford F150 pickup at the 1991 show, a vehicle that began its career in 1948. Only a decade later the F150 would become the best-selling vehicle in North America. Who would have imagined walking around at this show that a truck would become the company’s biggest seller? And that cars such as the Crown Victoria, Thunderbird, and Sable would vanish from Ford’s present-day offerings?

At least the Mustang is still around.