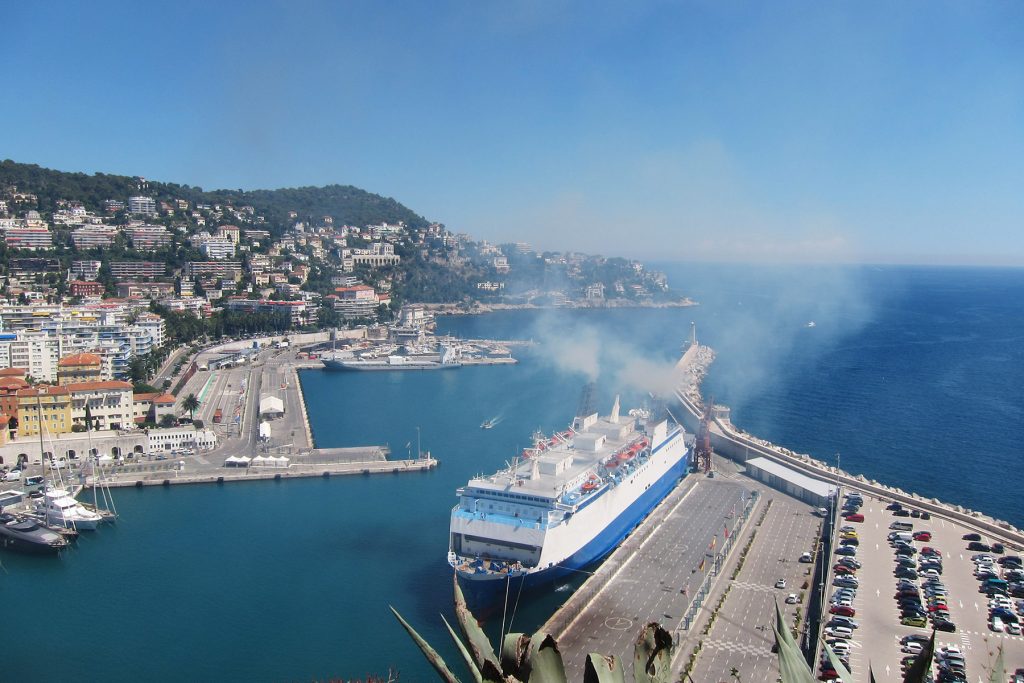 Why, in this modern era does it still seem that whenever we see a busy factory, a rumbling locomotive or large ocean-going freighters or even a lake-freighter we see plumes of smoke and fumes coming out of them? In the old days it was almost a romantic notion, a show of power if you will, to see smoke belching from the wood, coal and oil-fired steam-engines of the day. These were after all, the mighty machines that drove the industrial revolution and the economic powers of the world. In modern times, however, it’s become pretty obvious that (whether you buy into the global warming notion or not) with all the carcinogens and toxins floating about, it’s time we cleaned up our act.

One of the most maligned industrial polluters has recently been the maritime shipping industry. Perhaps, because these large ships are usually out at sea and therefore, out of sight is out of mind, they haven’t drawn the same scrutiny aimed at other, more obvious polluters. As such, there hasn’t been much done… until now.

With many eyes now focused on the industry and the propensity of more, even larger ships being built, there is a fresh interest in making these behemoths as eco-friendly as they can possibly be.

According to some sources, on a typical, long-haul trip, a typical, large container ship burning heavy fuel oil can belch out over 5,000 tons of harmful pollutants including CO2, particulates like soot and many other nasty things. To address this situation, there is a renewed push in the search for alternative fuels with the serious development of ammonia emerging as a real contender. In fact, it’s been proposed that if the above journey was undertaken in a ship burning ammonia as its fuel, the emissions would be close to zero!

To that end, some really fascinating strides are being made by the people that build the colossal engines that power these giants and the actual ship builders themselves.

One prominent contributor to the clean-up is engine designer and manufacturer WIN GD, based in Switzerland with manufacturing facilities in the far east and all around the world.

WIN GD recently confirmed an order has been received for four of its giant dual-fuel engines to be installed in LNG/dual-fuel, ammonia-ready vessels. The four 14,000 TEU container ships for Singapore-based Pacific International Lines (PIL) are being built at the Jiangnan shipyard in China. They will feature state-of-the-art WIN GD X92DF-2.0 dual-fuel engines capable of operating on both gaseous and liquid fuels.

Signaling a clear commitment to the environment, the engines will be fitted with WIN GD’s latest greenhouse gas emission reducing technology, iCER (Intelligent Control by Exhaust Recycling) which delivers enhanced combustion control. This reduces energy consumption by 3% in gas mode, and fuel consumption savings of up to 5% in diesel mode, while reducing methane slip (unburned fuel) by as much as 50% in gas mode.

WIN GD announced they are firmly committed to the energy transition, and to delivering engine technologies capable of operating with clean alternative marine fuels. Working with technology-focused customers has ensured that these goals will be reached. This first order for ammonia-ready vessels with dual-fuel, low-pressure engines demonstrates the ability to offer customers zero-carbon or carbon-neutral fuel solutions now. Shipping companies can invest today with confidence in a future fuel-ready engine technology.

The first of these new vessels is due to be delivered in August 2024 and that’s in line with WIN GD’s broader ambition to grow the sales of multi-fuel engines capable of operating on carbon-neutral fuels like methane and ammonia to 50% of the company’s order book by 2030. This also agrees with industry predictions as to when these fuels will be commercially available in large quantities.

Along with the advancements offered by WIN GD’s engine technology and their ability to offer remote technical support, the company has also established a strong global training network designed to equip crews with the skills needed to operate these new vessels. Training facilities are strategically located around the world.

In addition to the new fuel initiatives, WIN GD has expanded its global training network through a partnership with DCS POWER PTE LTD in Singapore to deliver state-of-the-art training for optimizing engine performance and preparing crews for the fuels of the future.

A full-mission engine room simulator with a virtual-reality engine room is a key feature of the training program. This allows crews to train as a team for responding to real-life emergency scenarios involving the engine itself and all engine room systems.

The training covers the full portfolio of engines, as well as the operational aspects of the future fuel landscape, prioritizing safety and engine optimization.

Another developing technology for improving efficiency is the growing use of heat recovery systems. Companies such as Sweden’s Alfa Laval have developed systems that recover the heat from normally wasted sources like exhaust and cooling water and re-purpose it to drive generators or other ancillary systems, again leading to substantially improved fuel economies.