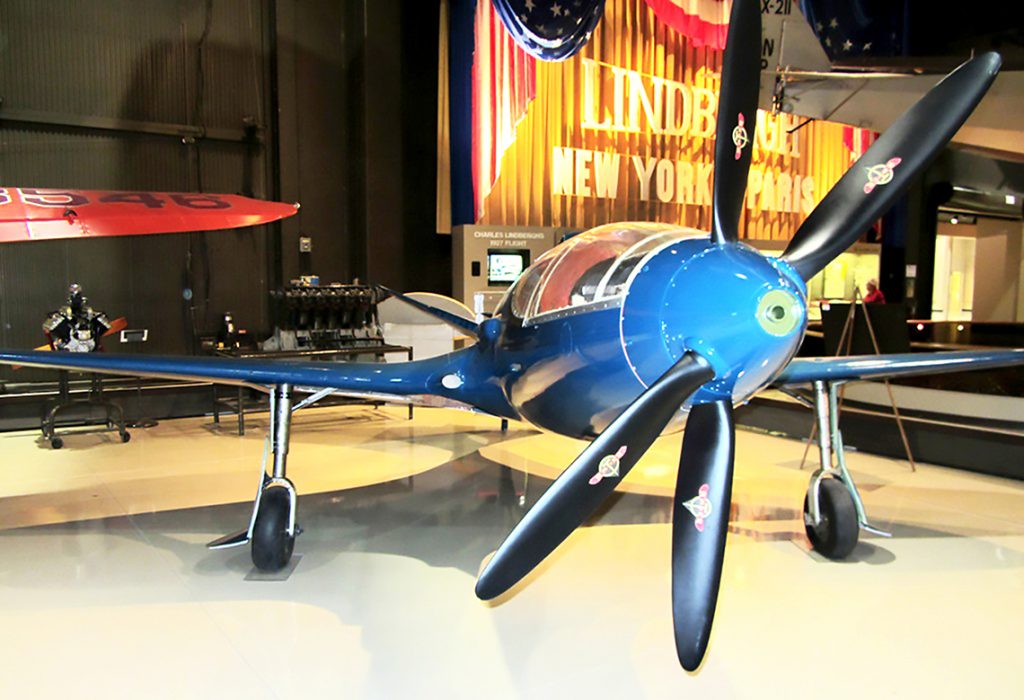 Ettore Bugatti wasn’t just a car-nut, his mechanical interests flew farther afield than just land transportation. With his amazing insight and technical prowess he conceived and oversaw the development of sophisticated lightweight engines for his racing and street cars, but he also saw their potential for other applications. He developed powerplants for locomotives and rail cars, a sort of self-propelled streetcar along with boats and not surprisingly, airplanes.

With the able collaboration of his chief engineer and designer, Louis de Monge, they conceived and developed a most remarkable and elegant aircraft, the striking Bugatti 100P.

Envisaged initially as a pure lightweight racing airplane to compete in the Deutsche de la Muerth competition of 1939, the duo also unabashedly, had their eye on another more lucrative application. With the rising tensions and military arms build-up of their German neighbours, many Reich-marks were being poured into offensive hardware for the burgeoning Luftwaffe. The real possibility of an armed conflict wasn’t lost on either the French military or the people at Bugatti.

It was put forth that with some judicious development for production and the modification of the basic design to accommodate a weapons load, the 100P could be a very fast and formidable fighter.

Unfortunately, the timing wasn’t right and events spiraled out of control faster than anticipated. World War Two was upon Europe before even the prototype 100P was ready for flight.

With a wary eye on the blitzkrieg military advance of the German invaders, Bugatti and company dismantled their advanced aircraft and spirited it away to a hidden location where it would be safe and secure from the ravenous Nazi hordes.

There it sat out the war and coming decades, only to lapse into anonymity as it was surpassed by newer technologies before it even had a chance to show its capabilities.

The original plane was eventually rescued and put on display in the EAA Museum in the U.S., but that wasn’t the end of the dream.

Fast forward to the late 1990’s and early 2000’s and an enterprising crew led by veteran aviator and test pilot Scotty Wilson along with Mr. John Lawson, hatched an ambitious plan to build and test an exacting flyable replica of Bugatti’s amazingly elegant plane.

Under the auspices of the EAA (Experimental Aircraft Association) and with much help and development a flying replica was built with some more modern and safer materials like epoxy bonded Duracore composite and glass fibre. The plane was to be powered by two modified Suzuki Hayabusa motorcycle engines mounted in tandem in place of the proposed Bugatti motors. The rest of the plane was bang on what Bugatti and de Monge had envisaged over half a century earlier.

After much tweaking and refining, the plane was ready for its first flight and this took place on August 19, 2015. After a misjudged approach and brake failure, there was a nose-over in soft ground and a propeller strike. Repairs and further modifications addressed the remaining safety concerns and over all the plane was deemed a success and further test flights were scheduled. With Wilson doing the flying a second successful test flight was made in October of 2015.

With many problems resolved a third flight was proposed and it was decided that afterwards, the replica would be placed permanently in a museum for all to be inspired by its beauty.

Scotty Wilson took to the controls once again on August 6, 2016 and lifted the now-christened “Blue Dream” from the runway and began retracting the gear when something went very wrong. One of the complex drives for the contra-rotating propellers failed with catastrophic results. The plane arched over on its side and impacted the ground at an acute angle. Wilson was killed in the crash and ensuing fire. The aircraft was totally destroyed.

Today, the original 100P is on display in the EAA museum in Oshkosh, Wisconsin.