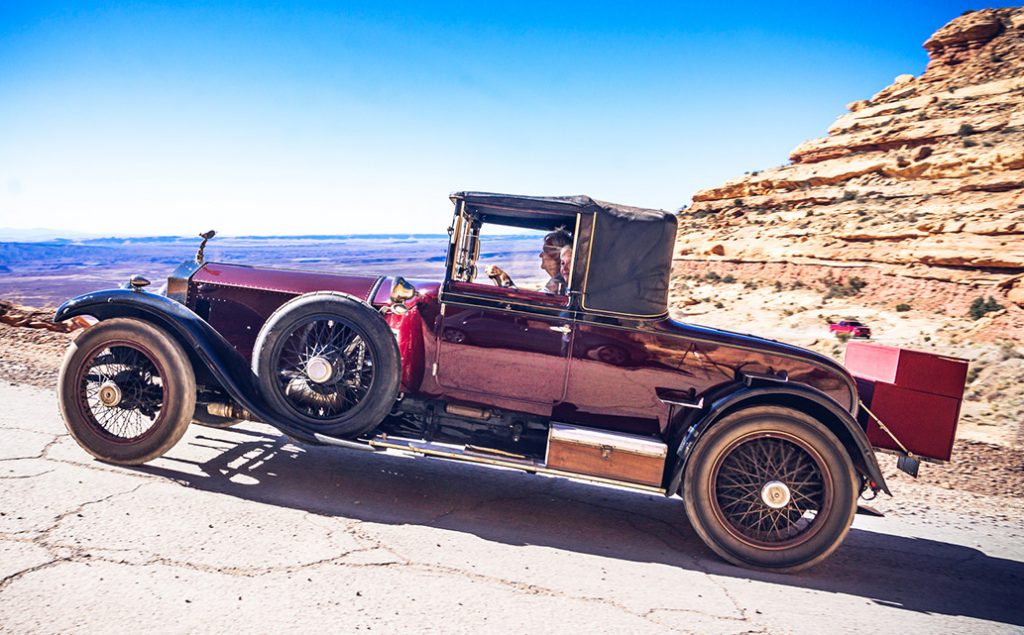 38 vintage Rolls-Royce Silver Ghosts came to the Trail of the Hoodoos Tour. All made the demanding trek with a minimum of fuss.

Collector cars, particularly luxury ones, are commonly regarded as the rare jewels of static museum exhibits and white-glove concours events. They are perceived to be delicate, untouchable treasures, perched on automotive velvet pillows and called “trailer queens”—as the only driving of these elite autos is on-and-off their transporters at exhibitions.

Nothing could be further from the truth with regards to one of the most bespoke autos of all time, the Rolls-Royce Silver Ghost.

Silver Ghosts have one of the highest rates of surviving drivability status of any car model ever built. Of the 7874 Ghosts made from 1907-1926 nearly 20% of these 105-year-old cars are still on the road. (By comparison, most car marques have only a 1-2% survival rate after just 35 years).

While Silver Ghosts got their famed moniker from members of the motoring press who were rightfully impressed by the Ghost’s quiet operation, the Rolls-Royce Motor Car Company set about proving the value of their auto’s lofty price tag (nearly $20X that of a Model T) by demonstrating their durability and reliability on lengthy, demanding drives and exhaustive racetrack endurance runs.

Silver Ghosts weren’t just one of the most luxurious autos of their time but also one of the best performing cars—winning performance competitions like the famed Alpine Trials.

In fact, it is due to the Rolls-Royce Silver Ghost’s tough reputation that they were purchased by the likes of Maharajahs and Lawrence of Arabia—customers in remote locations who demanded performance and reliability. Additionally, Silver Ghosts became the basis for lorries and armored cars during WWI.

The Silver Ghost community fully embraces and continues in the original spirit of Charles Rolls and Henry Royce by regularly engaging in lengthy and demanding tours with their century-old voitures. Many multi-week, multi-thousand-mile treks are annually held on multiple continents where large groups of Ghosts can be found crossing the Alps, traversing the searing heat, depth and vastness of Death Valley, and most recently taking on the grandiose American Southwest Desert in the 2022 “Trail of the Hoodoos Tour”.

After creating and hosting a very successful “Death Valley Tour” event in 2017, the twin-Silver Ghost-owning Clendenen Family decided upon creating a more comprehensive driving event through the great American Southwest for the enjoyment of the Silver Ghost community. The detailed planning started a couple years ago for what became the aforementioned “Trail of the Hoodoos” Tour.

Following a pandemic postponement, the planning of the Tour recommenced to encompass visiting no fewer than nine (yes, 9!) national monuments/parks in Utah and Arizona in the course of a 14-day, and nearly 2000-mile journey. The “Hoodoos” tour was designed down to the last detail to provide the most immersive Great American Southwest experience possible for the Silver Ghost driving community. Exhaustive motoring plans were executed, including crafting of what is arguably the best tour book ever created with perfect navigational information and engaging facts as to each and every venue—everything to make the lengthy tour smooth and enjoyable—just like driving a Silver Ghost itself!

No fewer than 38 Silver Ghosts and their owners signed up for the “Hoodoos”. The cars averaged 105 years in age and all were “bone stock” authentic collector vintage status with the only nod to contemporary technology upgrades being their use of 6V and 12V Optima Red Top batteries that powered most of the cars. Owing to the legendary durability and reliability, all of the century-plus-aged Silver Ghosts that started the Hoodoo tour finished the tour—with the only problems encountered being a couple flat tires (owing to the unpaved portions of the tour route—yes, you read that correctly—unpaved routes—re-living the 1907 conditions of the original Silver Ghost ownership).

A Stunning ­­Sequence of Venues and Visuals.

The “Trail of the Hoodoos” route was an enjoyable and wonderful two-week 2000-mile loop through some of the most spectacular scenery, national parks and venues on Earth.

The Ghosts initially gathered in the renowned Red Cliffs Lodge along the crimson bluffs of the Colorado River in Moab for the “Hoodoo-ers” to prepare for exploring Arches, Canyonlands and other famed parks of the region. But the respite didn’t last long because soon it was time to put some of the planned 2000 miles on the motorcars and the Tour headed south for 200-plus miles heading for the dramatic Canyon de Chelly in Chinle, Arizona. A day tour of the Canyon included taking in the cliff Anasazi dwellings and petroglyphs as well as the famed 1100ft Spider Rock spire.

The next segment of the tour headed north to John Ford’s favorite movie venue, Monument Valley—where Ghosts could be seen starring in their own camera-phone mini-cinemas and photographic works. An overnight stay provided necessary rest to prepare for one of the most arduous legs of the tour—ascending the aggressively steep and curvaceous Moki Dugway gravel mining road carved into the side of the mountains adjacent to Valley of the Gods.  The famed durability of the Ghosts was proven as every one of the 38 century-old Ghosts made the climb without pause. The undaunted Ghosts continued north, visiting Natural Bridges and journeying though Glen Canyon and gathering for an overnight stay on Lake Powell.

There was no touring rest for the Ghosts as the following day required traversing yet another unpaved backroad, the famed Burr Trail which serpentined its way through valley floors and up series of switchbacks suitable for only the most capable of contemporary SUVS—and 105yr old Silver Ghosts as the entire 38 Ghost assembly easily met the challenging ascent of the trail. The ghosts traveled through the White Pocket region of Berkley, Utah and on up to the 8000’ vistas of Bryce Canyon. A couple day’s stay allowed for the Hoodoo-ers to drive the rim of Bryce and be captivated by the views of the canyon. Other visitors to the famed Park were more captivated by the sight of the century-old elegant Silver Ghosts easily and effortlessly plying the Bryce Canyon rim routes.

Ascent continued in the next day of the Tour with the Ghosts climbing to the snow-covered 9000’ ft zenith of Cedar Breaks and on through the aspen groves enroute to Kanab, Utah.

After an overnight stay in Kanab, morning saw the Ghosts heading south visit the North Rim of the venerable Grand Canyon—with a return trip to Kanab to prepare for the next day’s tour of nearby Zion Canyon with its renowned vistas and then on back to Bryce Canyon for a stay in the Bryce Canyon Lodge.

From Bryce the next leg of the tour headed south east, back through White Pocket Fold /Grand Staircase Escalante and on to Torrey, Utah—the western entry of Capitol Reef National Park.  Sunrise greeted the 38 Ghosts streaming along the south side of the magnificent Capitol Reef bluffs, through Fruitopia to visit the other-worldly hoodoo topography of Goblin Valley.

At this point the tour was entering its thirteenth day and it was time to complete the loop back in Moab where the red dust-ladened Ghosts gathered again on the banks of the Colorado River.

One would have expected the usual touring fatigue to have set in—but such was not to be seen with all the participants not wanting the tour to end. Great accommodations greeted every evening and effortless driving though incredible vistas greeted each morning. Smiles and cheers accented each day. The only thing on the minds of the Touring participants was, “when and where is the next tour?” They know full well that their Silver Ghosts will be up to the future event and that another memorable Rolls-Royce ownership and driving experience will be enjoyed by all.­