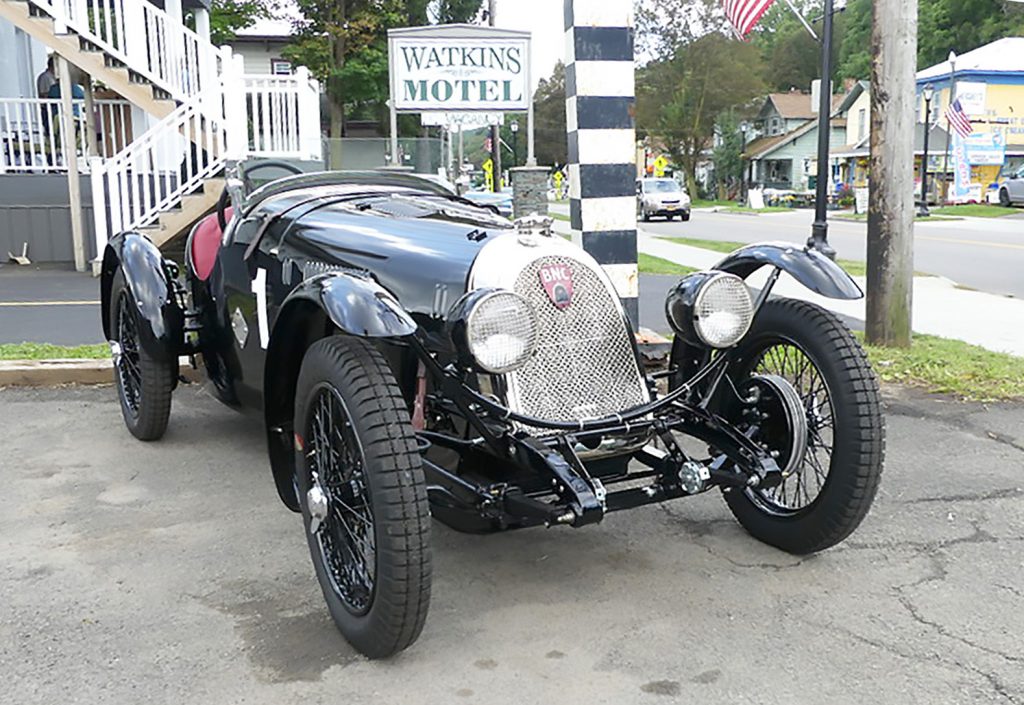 Bollack, Netter et Cie was a French automobile manufacturer in the late 1020s and produced some very interesting vehicles. Several achieved racing success and fame including the “special” entered in the first race at Watkins Glen.

When BNC was founded in 1922, Jacques Muller became the company’s  technical director when he sold his cyclecar company to engineer Lucien Bollock and René Netter, a banker who agreed to finance the venture.  Production continued now offering touring, Sports and Delivery models powered by four-cylinder 1000cc and 1100cc engines from “Ruby” or “SCAP”. In 1925 a supercharged 1100cc SCAP-engined car was offered, and the manufacturers claimed it to be the only supercharged car available in France. In 1927 a “Type Course” a racing Voiturette was produced, and this was the first BNC car to offer the sloping grill which became the marque’s distinctive feature. This was to become the Type 527.

From the late 1920s through the early 1930s BNCs completed in events all across Europe. Successes include taking the top three places at the 1927 Bol d’or at Fontainbleau. They were regular competitors at Le Mans with drivers Dore and Treunet placing 7th overall in 1928, and 10th overall in 1933. The BNC’s regularly beat similar voiturette racers from other makes such as Bugatti and Amilcar. As a matter of fact, in their day the Amilcars and charming BNCs became known as “The Poor Man’s Bugatti”.

The building of our particular subject car, a 1930 Type 527 “Saint Hubert” touring model started on December 24th, 1928 and it was completed on February 19, 1929. At the end of 1929 a Mr. Tremel purchased the car, but nothing is known about whether he competed in it in motor-sports events or simply used it as a daily driver.

The next record of the car’s ownership and history is in the early 1940s when George Caswell, a serious American motorcycle racer purchased it from U.S. car dealer George Taylor.  In those early days you had to have a proper sportscar to join the SCCA, so the BNC became Caswell’s ticket for admission. At this point, the car still had its original “Ruby” engine, but Caswell wanted more power and swapped out the “Ruby” for a higher-output “Ford V8/60” along with a matching Ford 3-speed transmission. As an aside, the original BNC/“Ruby” engine, as of 2009, was still in use in the UK. The V8/60 was a favorite engine with hotrodders and racing competitors, being used in midget racers, and also by such notables as Phil Hill and Ritchie Ginther driving V8/60 powered MG TCs.

Caswell drove the car to the events he competed in on public roads, and at times shared the car with his friend Otto Linton. On the way to an event in 1947 the original rear end failed was replaced with a rear end from a Bugatti T30 Caswell had been parting out. Early SCCA records have the car competing extensively in races in the eastern U.S. region with a partial list showing the car in events at Darien, Connecticut in 1943, the Fairfield Hill Climb in both 1945 and 1947, Narrow River in 1946, the Thompson Speedway in 1947, 1948 and 1949, Langhorne Speedway in 1948, and the Giant’s Despair Hillclimb of that year.

The car’s great claim to fame however, is placing 8th overall and 4th in class in the 1948 inaugural Watkins Glen Grand Prix. The BNC competed in the Junior Race against such cars as George Weaver’s Grand Prix Maserati, Frank Griswold’s Alfa Romeo 8C 2900, the Collier Brother’s well-known supercharged MG TC and the Bu-Merc Buick-powered Mercedes-bodied special of Briggs Cunningham.

Caswell sold the car in 1951 to Eric “Sonny” Grainger, a track announcer at Islip, Long Island and a co-founder of the Bridgehampton racing circuit who may have raced the car, but no records confirming this have been found. Grainger then sold the car to Chuck Molin who kept it until 1960 when he then sold it to John Gianella. Gianella raced it for a few years including an event at Bridgehampton in 1960. Gianella did extensive research but could find little about the car’s very early history.

One day the car wouldn’t start and a frustrated Gianella just put it in his garage where it spent almost the next forty years. In 2008, Mr. George Lymber, a friend of Gianella’s, found the car in the garage while helping Gianella move. Lymber purchased the car, cleaned it up and showed it at Watkins Glen in 2010. He had intentions of getting the car running, but not restoring it, preferring to leave it in its original patina. However, his failing health prevented that from happening.

The present owner, Peter McLaughlin bought the car in March 2014 and was determined to keep this piece of American racing history in the U.S. With hopes of driving it in the annual Watkins Gen re-enactment of the 1948 inaugural race, the car was gone over to see if it would be safe to drive. Unfortunately, years of not being used and some stop-gap measures including such things as a plastic jerry can for a fuel tank and only the dash panel separating the passengers and the engine compartment as there was no longer a firewall, rendered the car unusable. At this point, the decision was made to do a full frame-off restoration.

At the Fall 2021 Watkins Glen re-enactment event, the car was given a “shake down” on the roads within the track where various deficiencies came to light and the decision was made that it was still not quite ready for prime time. After its four-year restoration the car was shown, but not judged at the March 2022 Amelia Island concours in Florida where it drew considerable attention. At the time of writing this article, the car is back in the shop awaiting some changes, updates and adjustments. The goal once again, is to be able to have this historic racer take part in the Watkins Glen re-enactment in the fall of 2022. Hopefully, we’ll be able to see this venerable piece of American racing history back in action again soon.